Is Wildfire Modeling Behind the Times?

Wildfires are one of the most difficult natural disasters to model. Some argue wildfire modeling is 20 years behind hurricane modeling — and that’s not inaccurate. Hurricanes occur frequently, take several days to form and can be monitored via satellite. Hurricanes are also enormous and can be over 50 miles in radius. They are not obstructed by buildings and, while complex, are affected by fewer variables than wildfires.

Now, consider wildfires. A wildfire can start in seconds by a lightning strike or a dropped cigarette. Oftentimes, the source of ignition is concealed. A wildfire can smolder for days before significant smoke is reported and others can become destructive in a matter of minutes. A small burn — just a few acres — can destroy homes and other structures. Wildfires are affected by a myriad of factors from roads to fuel moisture and type to relative humidity. Sometimes, wildfires are so short-lived that these variables are not recorded; other times, a wildfire covers so many ecosystems that each area of the fire is impacted differently. 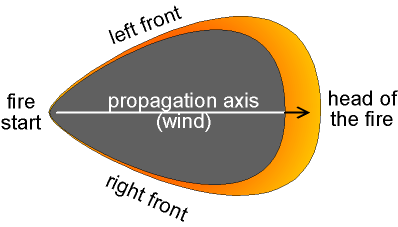 Take the Waldo Canyon Fire in Colorado, for example. A simplistic wildfire model didn’t account for many of the devastating factors that ultimately destroyed properties. One of these factors was ember showers, which caused homes to burn that were outside of the assumed danger zone. RedZone’s solutions, developed by expert wildfire analysts, take into account these lesser-known variables that can have devastating effects on properties during a wildfire. RedZone wildfire modeling also takes several scenarios into account at the same time. For example, it asks: If the wildfire goes in direction A, how far will it go? If the wildfire goes in direction B, how far will it go? And so on. By taking into account the likelihood and severity of every possible scenario, and every variable that goes with each, we are reaching a new standard for wildfire modeling.

RedZone looks at wildfire modeling from a loss-prevention perspective. Therefore, while a model might be good, if homes are unnecessarily destroyed, the model isn’t good enough. We’re developing wildfire modeling so it’s a standard, scientifically peer-reviewed model, which will prevent the loss of structures, homes and land. This model is mutually beneficial for both homeowners and insurance companies — and insurance companies would likely see an obvious and significant ROI increase from adopting it.