August 5th, 2019 marked the 70th year anniversary for the Mann Gulch Fire and tragedy. The fire was discovered on August 5th, 1949 after being started by lightning the night before. 15 firefighters jumped into the fire area to try an keep it small, but and were overtaken by the fire when a change in winds caused the canyon to “blow-up” with them in it. The event killed the district ranger and 12 of the 15 firefighters not long after they arrived on the scene.

The Mann Gulch Fire was one of ten fires ignited by lightning on August 4, 1949.  The Fire was discovered at 1255 pm on August 5, 1949, and a total of 16 USFS Firefighters were dispatched from the smokejumper base in Missoula as initial attack to the fire.  A Crew Chief and 14 Smokejumpers jumped into the Fire area and were met on the ground by the area District Ranger.  Less than two hours after landing safely that afternoon to a ‘relatively quiet fire’, the 16 Firefighters would face an overrun situation caused by a drastic wind change from a nearby thunder cell.  The winds caused a spot fire and fanned to grow from sixty acres when they arrived at 1600 hrs to nearly 3,000 in a span of just a handful of minutes. In the investigation that followed, the spot fire aforementioned was likely the cause of their demise. An article we found written on the fiftieth anniversary twenty years ago describes the harrowing instance.

In the blink of an eye the grass was ignited and stiff winds began to sweep the fire up the slope, toward the smokejumper crew. As Dodge at the head of the line of men crested a small finger ridge, he saw the fire now rushing up the slope toward his men. He immediately realized their escape to the river was cut off.

13 of those Firefighters, 12 Smokejumpers and 1 District Ranger, would perish in the Fire.  Three survived. It took the Crew Chief burning out a safety zone for himself and 2 of the Smokejumpers finding a rock slide area to make it through the incident. Their accounts have led to extensive investigation and lessons learned from the tragic event. 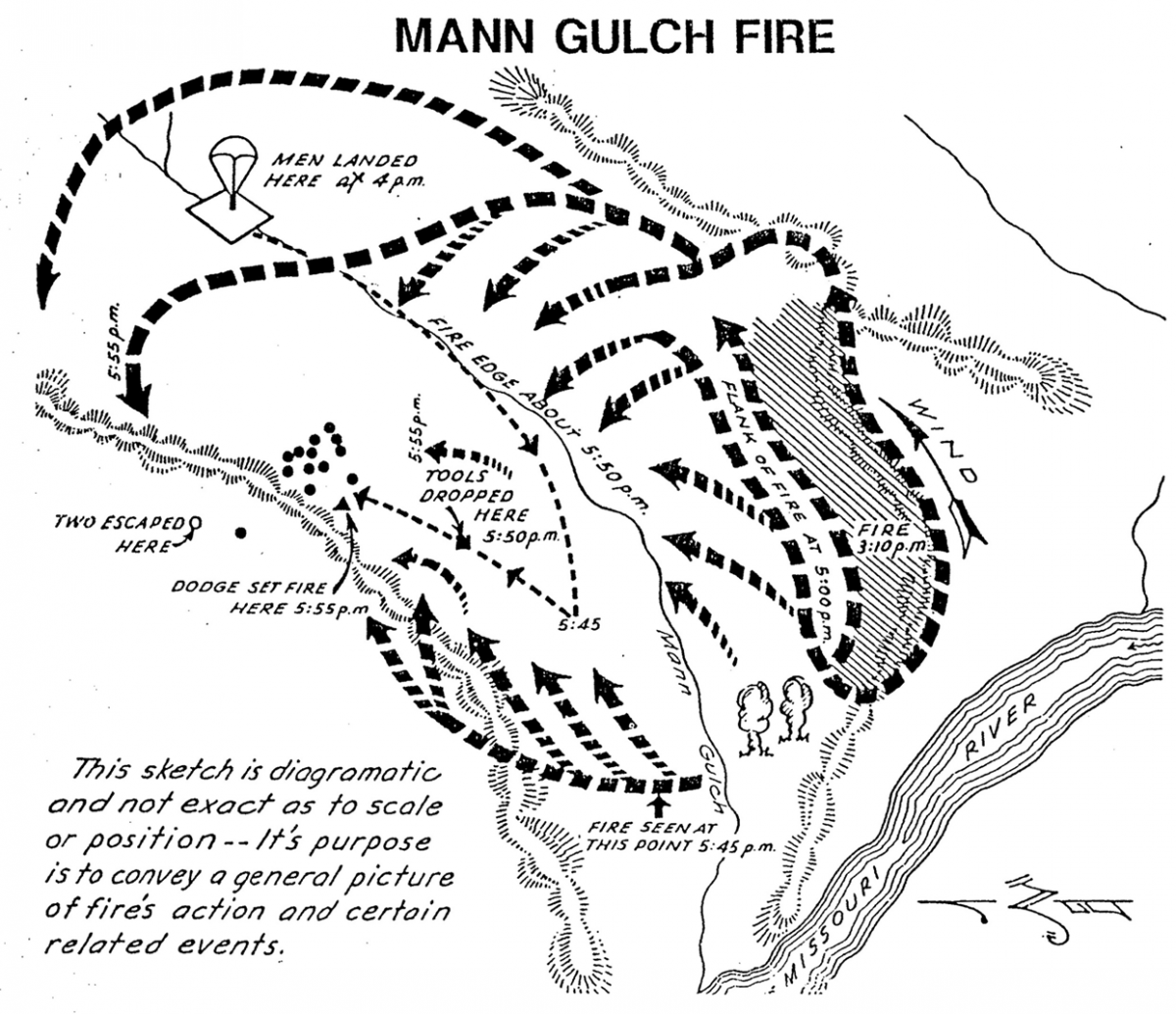 The loss of 12 smokejumpers in the Mann Gulch Fire was a tragic blow to the Forest Service’s ten-year-old smokejumping program. The smokejumpers had never lost a man to fire before Mann Gulch and no fire since Mann Gulch has been nearly as devastating to their ranks. Following the fire, smokejumper training was immediately modified to place much more emphasis on crew discipline and control. The events experienced in the Mann Gulch Fire also focused attention on the phenomena of fire blow-ups and the need to understand, and most importantly the ability to predict erratic fire behavior. The tragedy at Mann Gulch provided the needed impetus for the Forest Service to establish the science of fire behavior and spurred needed research into this little understood area of fire suppression. The knowledge gained from this fire research continues to influence how wildfires are fought and managed, and done so without exposing firefighters to unnecessary risk. Likewise, Fire Number 13, the Mann Gulch Fire, would prompt the Forest Service to establish two new centers, one in Montana and another in California, dedicated to developing and testing firefighting equipment. Over the years these centers have provided an array of items designed to protect firefighters including fire resistant clothing, hardhats and reflective metal-coated pup tents, or fire shelters, which enable modern-day firefighters to survive burnovers similar to the one experienced in Mann Gulch.

Picture taken from the Mann Gulch Accident scene in 1949