While spiral staircases and fire poles are historically related to fire stations, there was a time before they were commonplace.  Their implementation and popularity makes sense given the time frame when these older stations were built and the equipment utilized to respond to a fire.

In the 1850s, American fire departments transitioned from the hand-pump trucks to the much heavier steam-powered fire engines. These new, more efficient, higher water capacity trucks were pulled by horses. While the horses were stabled downstairs with the engines, the firemen slept and cooked upstairs. Horses would follow the food smells and climb the stairs. To prevent the horses from doing this, the firemen installed spiral staircases.

The Emergence of Fire Poles

When the alarm would sound, the fire fighters raced downstairs to hitch up the horses before heading to the fire. The tight confines and steepness of spiral staircases hampered this speed. What came about is possibly one of the most recognizable elements of a traditional fire house:  the fire pole. First notably put into use in 1878 by David Kenyon in Chicago, the fire pole allowed his department’s firefighters to arrive on scene sooner than others. Around 1880, Boston adopted the pole as well, and it became commonplace across the country soon after. 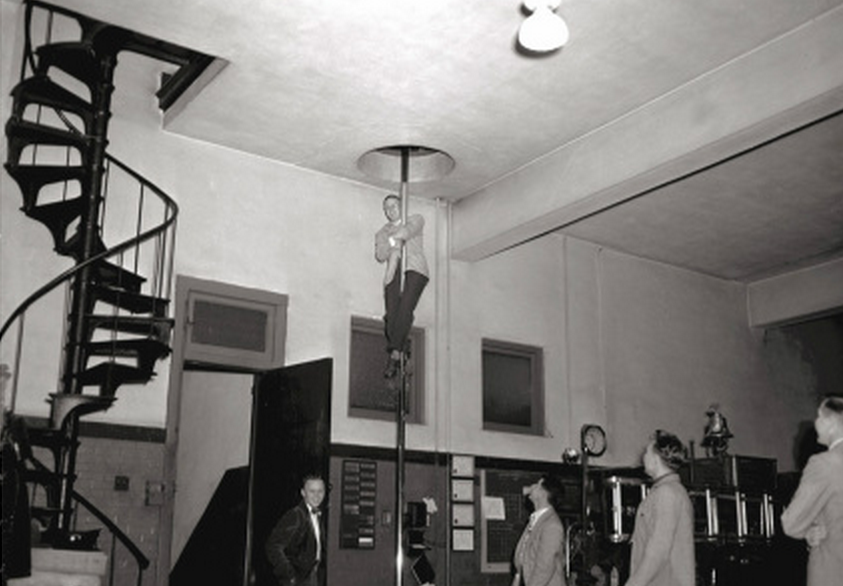 Spiral Staircase and Fire Pole (Source: “Priceonomics: The Rise and Fall of the Fireman’s Pole”)

With the invention of the combustion engine, horse-drawn engines ceased to be utilized, and therefore spiral staircases to keep horses out of the bunk area became unnecessary. As more fire stations were constructed or renovated, many spiral staircases were removed or not installed at all. Additionally, the previously standard structure of horses and equipment on the base level and bunk and kitchen above was altered to better accommodate the sleeping area, kitchen, and storage. Some stations still have their spiral staircases and fire pole; however, due to numerous injuries involved with descending the fire pole, many have been removed. Broken bones, sprained ankles, back injuries, and even death can occur from losing one’s grip on the fire pole or descending too quickly and being unable to slow down. Washington State currently does not allow installation of a fire pole in any newly-constructed fire stations.

Due to the oftentimes unsafe speeds involved with descending fire poles, many stations that still utilize a multi-story structure are replacing the poles with fire slides. This allows the firefighters to drop from a higher floor to the ground floor quickly, but much more safely. Although many stations are moving toward slides or single-story construction, the now-decorative fire pole will continue to be a common symbol in fire houses across the country.